Ty Edmond and his Brothers at Colgate

Sports unite, create friendships and togetherness - "Football is a way of LIFE!"

General and current information about QB- Family- TY Edmond -Travis Edmond- and Logan Edmond are available here at QB Family. This site supplies you with the history of our three son's academics, character, comittment, work ethics, and passion to be the best they can be, in their careers as being a QB. This site is for our comittment and love for the game of football, and for our family.  These three brothers have been playing QB since the age of 5 years old, and they understand the comittment, desire, hours of training, and what it takes to be a QB.

It can be helpfull with some important college recruiting information and for the recruiting process. There are some tips on how to get ready for the next level. We welcome you to come in and look around and we thank you for your visit.

Remember when you are following your goals!

" Do not follow where the path may lead. Go instead where there is no path and leave a trail"

his play speak for

itself- and it speaks

Since Southern Lehigh's remarkable senior quarterback/safety Travis Edmond is such a selfless football player that he absolutely refuses to talk about himself, other sources must be brought in to do so.

Edmond, 6-foot-1 and 185 pounds of pure heart, guts and talent, would tell you his play speaks for himself.

It certainly did in Friday night's 40-37 donnybrook of a win over previously unbeatenNorthwestern Lehigh. Edmond's numbers told a story: 150 yards rushing and a touchdown on 19 carries. 117 yards passing, three touchdowns. Six tackles, including perhaps the play of the game, on defense.

Maybe Edmond's motto could be speak softly and carry some big stats.

But the stats don't say enough.

When the game was the on the line in the fourth quarter -- and Northwestern led 29-26 when it started -- Edmond was everywhere. Of 14 Solehi plays in the fourth, Edmond had the ball on 11 of them. He ran as hard as any running back between the tackles. Edmond's 20-yard TD run could not have improved on as he dodged tacklers, broke a tackle and found a burst on what had to be weary legs.

Simply put, Edmond imposed his will on the Tigers.

Maybe more impressive than any offensive play was the fourth-down stop of Northwestern's 1,000-yard rusher Harry "The Horse" Hall that set up that remarkable run.

Hall maybe had a hole to get the two yards he needed on coach Josh Snyder's gamble from his own 42 -- for the record, we liked the aggressive play call -- but then a whole lot of Spartans, looking like their namesakes at Thermopylae, filled it.

And the man on the bottom of the pile, the one who hit Hall's churning legs? Edmond.

Edmond graciously accepted a compliment for the play but promptly deflected praise to his teammates, especially junior linebacker/fullback Dylan Niedbalski, who, like Edmond, owned the fourth quarter.

But since getting word one out of the pleasant, friendly and thoughtful Edmond about himself -- he must have mentioned half of his team in a postgame interview -- is Mission: Impossible and we don't have Peter Graves handy, we've brought in others to do so.

For example, the veteran Northwestern football types hanging around the press box, whose admiration for Edmond grew steadily throughout the game.

"That kid," one finally said, "is one amazing athlete."

Or listen to Southern Lehigh junior linebacker/fullback Michael Riccio, who played an outstanding game himself, when asked about Edmond.

Friday night at Northwestern, Edmond did everything he could to help his team overcome a gallant and talented foe. Edmond is right to say it's a team effort, and it was; the Spartans' list of standouts could extend into next week.

But everybody will tell you Southern Lehigh's success starts with Edmond -- even if he won't. And that's OK. Edmond's play really does say it all, and may well be saying it really well into December.

Brad Wilson may be reached at bwilson@express-times.com. Follow him on Twitter@bradwsports.

Selected by Coordinated Heath as the Scholar Athlete of the Week! Throwing for 358 passing yards 4 TD's and 1 rushing TD. Click on the image to watch the video interview

Congratulations to Frantz Trophies Player of the Week: Travis Edmond of Southern Lehigh 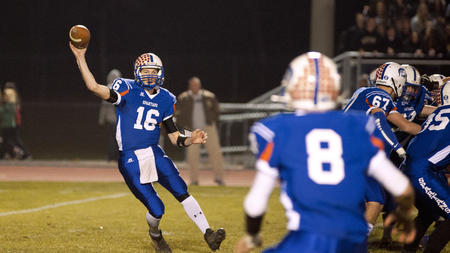 On Saturday morning's Calling All Sports radio show on AM-1470 and fox1470.com, we selected our second Frantz Trophies/National Football Foundation Lehigh Valley Chapter Player of the Week.

We had a number of great candidates again, including Mason Kholi of Central Catholic, Christian Gretzinger of Palisades, Zach Thatcher of Saucon Valley and unsung hero Dalvyn Reynolds of Easton.

But our choice was Southern Lehigh quarterback Travis Edmond, who completed 14 of 27 passes for a school-record 358 yards and four touchdowns in a 40-20 win over Wilson.

Edmond has been a stellar QB for several years for the Spartans, and he got a big assist on Friday night from receiver Tim Walters, who caught nine passes for 219 yards and three TDs.

WFMZ " News Interview with Ty Edmond" on the recruiting process. Click on the link!

"Champions are made, not born"

To view Ty Edmond's demographics and resume click here! So we are able to help accomodate you in your journey.

Travis Edmond #16 QB Sophmore Takes over where his brother Ty left off.

Logan Edmond age 11 - QB #10 following in the footaball QB family tradition. " High Quick Release" another over the top lights out gamer leading his team to a 10-0 Season

Logan Edmond gets his next play from Coach Budha

Logan gets his next play from Coach Budha. To view more of the Log click
here! Logan has natural running speed and cutting abilities, which can't be
taught. With his throwing mechanics and decision making process, Logan is a
dual threat QB second to none.

Where to Find Us

We are happy to introduce ourselves to you now on the Internet!